After deciding that Unity3D wasn’t the right choice of game engine for our “traditional” 2d 8bit RPG, I decided to try out a popular multiplatorm engine in Java called libGDX along with a free tilemap editor called Tiled. I spent a while programming a RPG engine with leveling system, spell system, stats, items, tiled maps, etc and integrated a random dungeon generator too.  This attempt was actually very much ground up. That is, I started with text graphics, eventually advanced to sprites etc in Java, made a little rogue-like engine along the way.

Then I converted this to libGDX, which had lots of other nice features that everybody wants in a game engine, like support for Tilemaps! 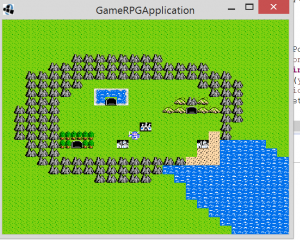 Then I started making the battle scenes… 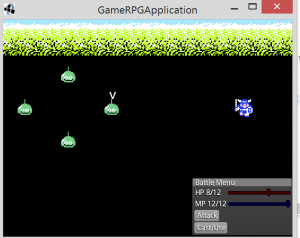 …and again we repeated history and ran into a user interface annoyance – I just couldn’t get it to look and feel like a classic 8bit RPG and unfortunately, libGDX’s documentation at the time was, shall we say, underwhelming… Also, there were some other annoyances that made version control difficult (or I am just a dumbass, which is entirely possible).

So, yet again we had not leveled up enough to beat the game engine mini-boss. But finally we found the epic magic sword in a simpler, albeit more embarrassing, game engine after all this time!

If you want to see a preview of our nearly finished game in this mysterious game engine, play the demo and watch our weekly twitch stream on Tuesdays at 9pm central : https://www.twitch.tv/victimcache

ATTENTION HEROES: Tune in to Victim Cache’s Twitch stream Tuesday July 25th 2017 for a super special mystery powerup giveaway opportunity to commemorate the beginning of our second beta bug squashing  complete game playtest extravaganza! The last time we got to the end and couldn’t beat the final boss… but this time we made it easier, so we will (probably) triumph and get the good ending!